We manufacture affordable and high-quality menswear, womenswear and kidswear, with a wide range of fabrics and styles.

Click on the pictures below to view some of our products

French Terry, terrycloth, or terry towelling, is a fabric with loops that can absorb large amounts of water. It can be manufactured by weaving or knitting. Towelling is woven on special looms that have two beams of longitudinal warp through which the filler or weft is fired laterally. The first industrial production of terrycloth towels started in 1850 in England. Nowadays, terrycloth is also a fabric used in men’s, women’s and children’s clothes. One of its sides is flat, while the other side is with cross loops. It is either 100% cotton or contains polyester with elastaine (lycra). It is often warp knitted, and the term French Terry is colloquially used for all warp knitted Terry. 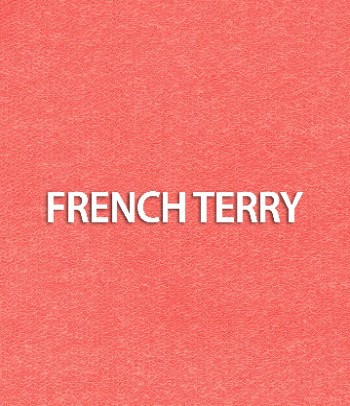 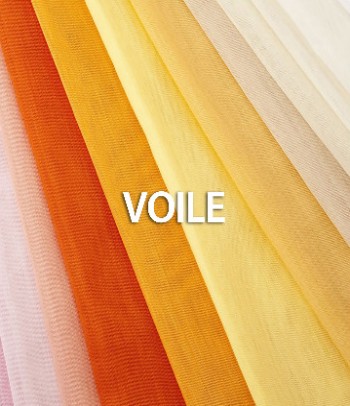 Voile is a soft, sheer fabric, usually made of 100% cotton or cotton blended with linen or polyester. The term is French for veil. Voile tends to have a higher thread count and a tighter weave than most cotton fabrics, making it soft and silky to the touch. Voile has a somewhat slippery texture and is known for its light drape. Its lightweight, breathable nature makes it great for summer tops and dresses.

Corduroy is a textile with a distinct pattern, a “cord” or wale. Modern corduroy is most commonly composed of tufted cords, sometimes exhibiting a channel between the tufts. Corduroy is, in essence, a ridged form of velvet. Corduroy evolves from the ancient cotton weave known as ‘fustian’. This manufactured textile existed for thousands of years before it came to acquire the name of corduroy as we know it. Corduroy is a truly vintage textile of cotton or cotton-mix fabric with a velvety feel, making it durable yet soft to touch. It has been used mainly for men’s working and sporting clothing throughout the centuries. Modern uses include trousers, shirts, skirts, suits, caps, dresses,jackets,toys and soft furnishing. 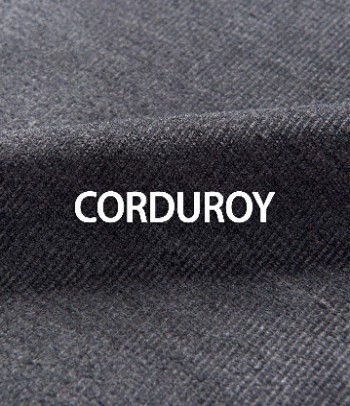 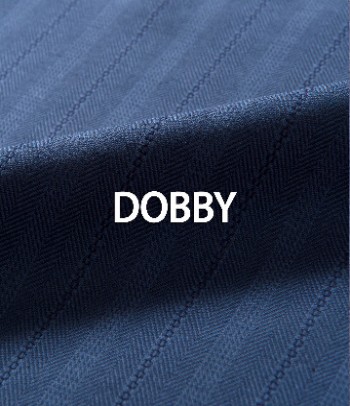 Dobby cloth is a type of woven fabric, made on a special machine known as a dobby loom and known for having small geometric patterns. It is also known for being very textured compared with other weaves. These looms have been around a long time, first appearing in 1843. They are a floor standing machine that uses something called a dobby. This is believed to be a corruption of the term ‘draw boy’ and refers to a weaver’s helper who controlled the warp threads. Dobby fabric can use a variety of fine fibres to weave with and result in fine materials. When used in dress shirts, the result is a fabric that has a slightly raised weave rather than a smooth texture. This makes it very popular for striped or checkered dress shirts.

A chambray is a plain weave fabric woven with a colored yarn in the warp and a white yarn in the weft. While chambray and denim are often confused for one another, they’re not exactly the same fabric. The chambray’s warp and weft threads will alternate one over the other, like a plain weave, while denim is weaved like a twill. Chambray’s history begins in the mid-1500s, as it originally found roots in the cambric fabric. Cambric is a lightweight plain weave fabric, at the time made of linen. A high-quality cloth, cambric was often used for shirting, handkerchiefs, and for intricate pieces like lace and needlework. Chambray has exploded in popularity in recent years because it offers the unique texture and appearance of denim while being much lighter and easier to wear in summer. 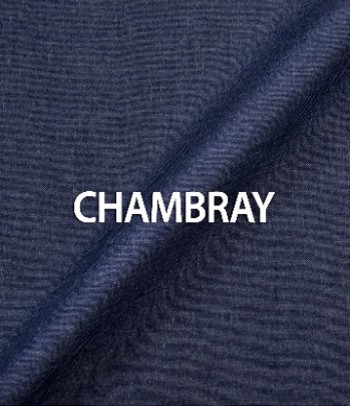 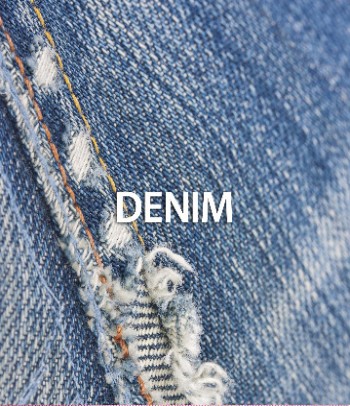 Denim is a sturdy cotton warp-faced textile in which the weft passes under two or more warp threads. The most common denim is indigo denim, in which the warp thread is dyed, while the weft thread is left white. Denim origins can be traced back to the late 1700 in Genoa, Italy, and Nimes, France. Denim, or Jean, then went on to become the working-man’s textile in Northern Italy, as depicted in many early 17th century works of art, as it was cheap and durable. Fast forward almost a century, in the early American West, Levi Strauss set up a dry goods shop in California, while making good friends with a local tailor, Jacob Davis. Together, they invented the well knows jeans trousers, inserting copper rivets at common rippage spots on the worker’s clothing. Everyone knows the rest of the story.

The Oxford weave is a type of basket weave, one of the oldest styles of weaving. It’s made by threading through each other two equal groups of yarns to form the weave. Oxford cloth did not originate in Oxford, but rather in a textile mill in Scotland at the end of the 19th century. Apparently, the mill created four different fabrics named after four of the most prestigious universities of the day – Yale, Cambridge, Harvard and Oxford. Little is known about what happened to the other three fabrics, but clearly it was Oxford cloth that proved to be the big winner. Nowadays, Oxford weave is commonly found in both casual and formal shirts. Generally, an Oxford shirt is warmer than a plain weave shirt and cooler than a twill shirt. 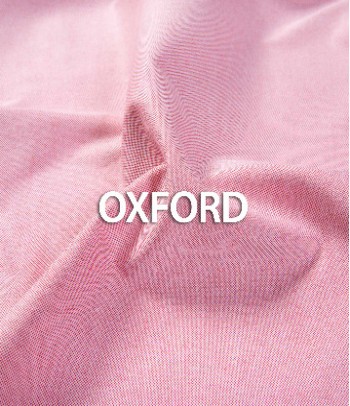 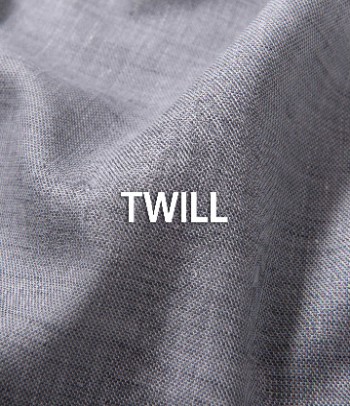 Twill is a type of textile weave with a pattern of diagonal parallel ribs. This is done by passing the weft thread over one or more warp threads, then under two or more warp threads and so on, with a “step,” or offset, between rows to create the characteristic diagonal pattern. Because the filling and warp yarns in a twill weave do not interlace as many times as they do in a plain weave, the yarns can be packed more tightly together. This makes the fabric stronger, thicker, and better able to hide soil than a plain weave. Lightweight twills are commonly used for dresses, scarves, and neckties. Heavier weights are used for jackets and outerwear for work such as carpentry and construction.

Flannel is a soft woven fabric of various fineness. Flannel was originally made from carded wool or worsted yarn, but is now often made from either wool, cotton, or synthetic fiber. Flannel may be brushed to create extra softness or remain unbrushed. The origin of the word is uncertain, but a Welsh origin has been suggested as fabric similar to flannel can be traced back to Wales, where it was well known as early as the 16th century. The use of flannel plaid shirts was at peak in the 1990s with popular grunge bands like Nirvana and Pearl Jam using them as one of the trademarks of their shaggy look. 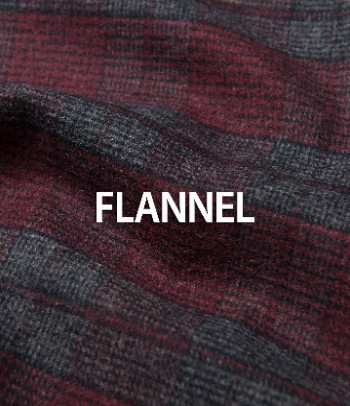 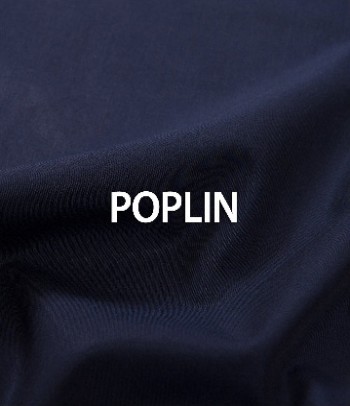 Poplin weave is where the weft and warp fibers go over and then under one another. It originally used a silk warp with a worsted yarn weft to make a stout cord material. The term itself came from the French word ‘papelino’, that meant a fabric made in Avignon. At that time, the city was famous for being home to one of the two popes. Back then, the silk and wool poplin was standard. But in later years, the same pattern started to be used with cotton. Poplin is one of the most common fabrics used in shirts. Poplin shirts are cooler than an Oxford or a twill shirt so ideal for spring and summer. But because they are light, they can also layer well with a jacket or jumper. Their sheen makes them smart enough for the most formal occasions. But their durability also means they are okay to wear on a daily basis.

Plain weave is the most basic of the three fundamental types of textile weaves. It is strong and hard-wearing, used for fashion and furnishing fabrics. When weaving plain weave, the warp and weft are aligned which forms a simple criss-cross pattern. Each weft thread crosses the warp threads by going alternately, first over one warp, then under the next and so on. The next weft goes under the warp that the neighboring weft went over, and again so on. The earliest evidence of weaving date from 27,000 years ago and were found in Dolni Vestonice in the Czech Republic in the shape of impressions of textiles and basketry and nets on little pieces of hard clay. 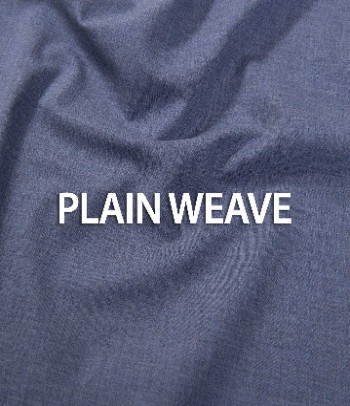